In late August of 1954, New England was hit by Hurricane Carol. I grew up in the Wollaston section of Quincy, Massachusetts. My memories of that hurricane have faded, but I do remember some of the fun it provided for a twelve-year-old boy. I enjoyed wading in the waste-deep water in the playground of my grammar school, Wollaston School. I "pigged out" on the free ice cream that Howard Johnson's ice cream plant gave away before it went bad from lack of refrigeration. Here are a few photos that I shot after the storm with my Kodak Brownie Hawkeye. 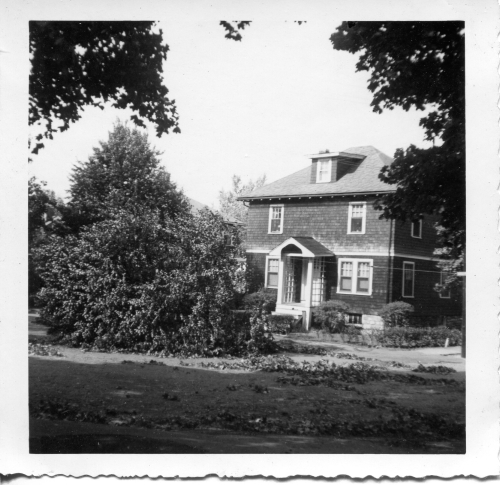 View from in front of my parents' home across Hillside Ave. to Everett Street in Wollaston section of Quincy, Massachusetts 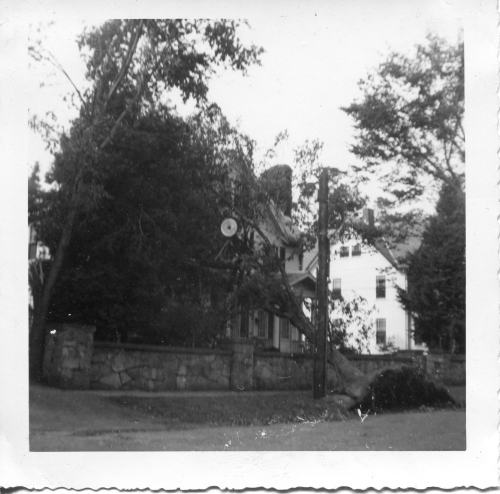 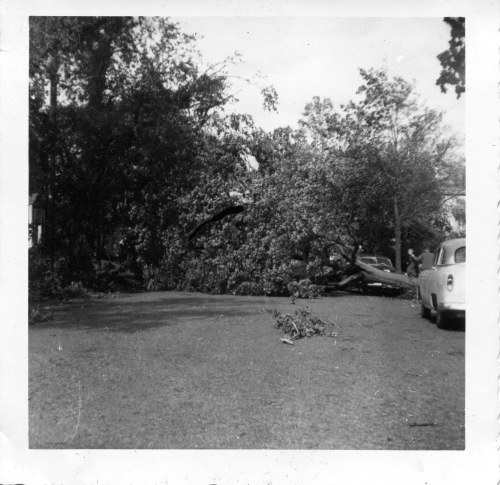 Downed tree in Wollaston section of Quincy, Mass. after Hurricane Carol in 1954 . I believe this was on South Central Ave.

Hurricane Carol was among the worst tropical cyclones to affect the New England region of the United States. It developed from a tropical wave near the Bahamas on August 25, 1954, and gradually strengthened as it moved northwestward. On August 27, Carol intensified to reach winds of 105 mph (169 km/h), but weakened as its motion turned to a northwest drift. A strong trough of low pressure turned the hurricane northeastward, and Carol intensified to attain Category 3 status on the Saffir–Simpson Hurricane Scale. The well-organized hurricane made landfall on Long Island and Connecticut on August 30 near peak intensity, and quickly became extratropical over land.Carol was similar to the New England Hurricane of 1938, as they were near the same intensity when affecting New England, in addition to both storms accelerating toward the region. Both systems hit within 40 miles (64 km) of each other at high tide, resulting in a substantial storm surge in Narragansett Bay. At the time, Carol was the third costliest United States hurricane, and the nineteenth costliest U.S. hurricane when adjusted for inflation, as of 2004.

and, The Patriot Ledger wrote:

This compact, but powerful, borderline Category 3 battered New England, killing 68.  With 100 mph winds, gusting up to 135 mph, Carol caused over $460 million in damage, destroying 4,000 homes, 3,500 cars, and over 3,000 boats. This was arguably the most destructive storm to hit Southern New England since 1938. It formed as a tropical storm near the Bahamas, making brief landfall along the Outer Banks of North Carolina.  The storm passed over Long Island, just east of the Hurricane of 1938 landfall, through Central New England into Canada, bringing a storm surge of 14.4 feet to Narragansett Bay and New Bedford Harbor. Over 6” of rain fell. Water depths reached 12 feet in downtown Providence, Rhode Island.  Some consider Carol the worst storm in the history of Cape Cod. All of Rhode Island, much of Eastern Connecticut, and much of Eastern Massachusetts lost power, with a 95 percent loss of telephone service. The storm was still producing hurricane-force winds as it traveled through New Hampshire and Maine. Notably, it knocked down the spire of the Old North Church. The name ‘Carol’ was the first Atlantic hurricane to be retired.

I Welcome Your Comments!

Please Post Your Thoughts, Comments, and Remarks in the "Comments" Section below… >>>>>