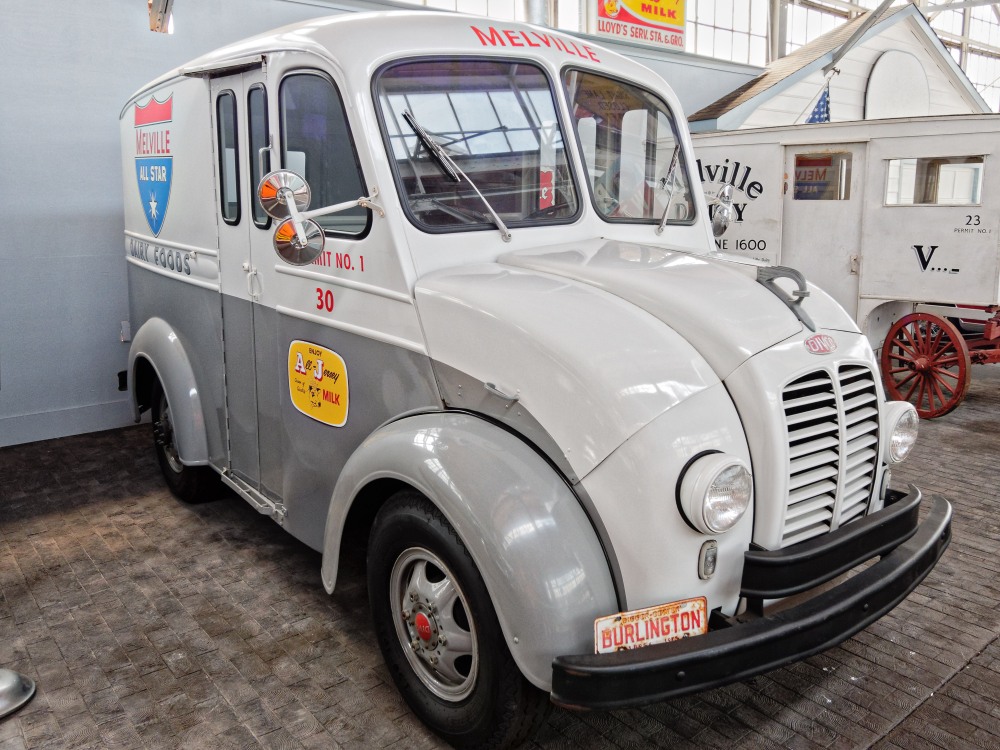 At the end of my first enlistment, in 1962, I was discharged from the Navy. I tried several jobs during the time I was a civilian. My most memorable employment was driving a milk truck. A small local dairy in Milton, Massachusetts, named Thatcher Farm hired me to deliver milk to their customers. Thatcher Farm has been owned and operated by the Manning family since 1891. The company delivers milk door-to-door to the local community in and around Boston. In 1962, they operated a small fleet of Divco “Step ‘n Drive” milk trucks similar to the one in the photo. I drove a 1939 Divco while delivering milk for Thatcher.

Divco called their trucks, “Step ‘n Drive” for a good reason. In order to enable the driver to make quick entry to and exit from the truck, each Divco had sliding doors on each side of the truck. To drive, a person would remain standing at the steering wheel, while operating three pedals with his two feet. The accelerator pedal was not a pedal at all. It was a small button on the floor where the driver’s right foot was positioned. To apply pressure to this button, the driver would use the toes of his right foot while he kept most of his weight on the heel of his right foot.

The driver was essentially, standing on his right foot and holding the steering wheel with his left hand while his left foot (and leg) were busy operating the clutch and foot brake pedal. His right hand was used to shift gears with the large floor-mounted gear shift lever.

The clutch and foot brake were in a single pedal that the driver operated with his left foot. In order to completely release the clutch, the driver’s left leg would be raised into a position where his upper leg was parallel to the floor. As that pedal was pushed toward the floor, it would disengage the gears for about half its vertical path. At the half way point, the brakes would start to be applied. If this pedal was pushed quickly all the way to the floor, the pedal would stick, and the parking brakes would be applied. Thus, the driver could pull up to a customer’s house, quickly engage the parking brakes, and jump out of the truck with a wire milk-basket carrying several bottles of milk in his hands.

Needless to say, it took some practice to get accustomed to driving while standing on one foot. Of course, one had to have pretty good balance to operate the manual shift, steering wheel, etc., while driving up and down the hills and rounding the curves around Boston.

As a new driver, I was told many stories of the times that drivers had fallen out of their trucks while attempting to make turns, climb hills, and shift gears with their doors open. I guess some of those stories were true. Luckily, I managed to avoid that problem.

(The trucks also contained a large tiller that the driver could use with his right hand, to gradually apply the breaks without applying the clutch which was useful while descending hills.)

I drove the Thatcher Farms milk truck during the months of November and December of 1962. Because Massachusetts is pretty cold during those months, we had to be careful that our cargo didn’t freeze. (If I remember correctly, milk starts freezing at about 31 degrees F.) Of course, the back of the trucks weren’t heated, so we placed blankets over the milk bottles to keep them warmer. Another factor that helped prevent the milk from freezing was the vibration of the truck. Divcos had four-cylinder engines that shook the whole truck. It takes a lower temperature to freeze a liquid that is being shaken. However, I can remember at least a couple of occasions, when, while driving that truck, I would hear loud bangs, as frozen milk bottles exploded in the back of my truck. Boston gets pretty cold in December!

After a couple of months of this, the Navy started looking much better. So, In January, 1963, I re-enlisted in the Navy, and headed to Brooklyn Navy Yard to report to the destroyer, USS Putnam (DD-757.) I guess I preferred a cold signal bridge to a cold milk truck.

One thought on “Driving a Milk Truck !”