I’ve been a Boston Red Sox fan as far back as I can remember. My mother had a snapshot of me wearing a Red Sox T-Shirt when I was about three or four years old. I’m afraid II can’t find that photo now. My Grandpa Locke was a big fan and I spent a lot of time with him. My Mother loved the Red Sox too. I think my Dad was more of a Boston Braves fan, but my Mother, her father and I might have changed his thinking.

My grandfather lived right across the street from my grammar school, Wollaston School in Quincy. I frequently stopped to see him on my way home from school. On spring afternoons, he frequently sat on his front porch listening to Red Sox games on the radio. I can still remember him sitting back in his chair and snoozing and sometimes even snoring as I approached his house. As I started climbing the porch stairs, the creaking steps would awaken him. Even though he had been asleep, he always seemed to know the score of the game, who was pitching and other details.

My dad worked for a Boston life-insurance agency. Except for a couple of years during World War II when he was in the Army, he worked for that same company from the time he was sixteen years old until his sixties when he finally retired. The insurance agency had season tickets to all the Boston sports teams’ games so that their big producers could entertain their clients. My dad would occasionally get tickets to the less popular games. He never got tickets for our rival New York Yankees. It was usually the last place Washington Senators, Philadelphia Athletics, or St. Lous Browns that we would see. He also got tickets to the Boston Braves games once in a while. I always loved baseball, and was happy to go to any game. I played baseball in the local playground and on the Quincy Ledger newsboys league but was never good enough to make the high school team.

Of course we were all big Ted Williams fans. I also have fond memories of other Red Sox from that era: Johnny Pesky, Bobby Doerr, Billy Goodman, Mel Parnell, Dom DiMaggio, and others. One player that stands out in my mind was Jimmy Piersall. We sat in the right-field stands at Fenway Park one day while Piersall was playing right-field for the Red Sox. Piersall was later diagnosed with bipolar disorder and became the subject of a book and a film, “Fear Strikes Out.” However, we didn’t know at that time the explanation for his crazy antics. People in the stands continued to harass him throughout the game, hoping to set him off. He became very angry and yelled at the fans and even threatened several of them. However, later that season, he really became unhinged. Wikipedia describes Piersall’s more serious outbursts:

“On May 24, 1952, just before a game against the New York Yankees, Piersall engaged in a fistfight with Yankee infielder Billy Martin. Following the brawl, Piersall briefly scuffled with teammate Mickey McDermott in the Red Sox clubhouse. After several such incidents, including Piersall spanking the four-year-old son of teammate Vern Stephens in the Red Sox clubhouse during a game, he was demoted to the minor league Birmingham Barons on June 28.

“In less than three weeks with the Barons, Piersall was ejected on four occasions, the last coming after striking out in the second inning on July 16. Prior to his at-bat, he had acknowledged teammate Milt Bolling’s home run by spraying a water pistol on home plate.

“Receiving a three-day suspension, Piersall entered treatment three days later at the Westborough State Hospital in Massachusetts. Diagnosed with “nervous exhaustion”, he spent the next seven weeks in the facility and missed the remainder of the season.

“Piersall returned to the Red Sox in the 1953 season, finishing ninth in voting for the MVP Award, and remained a fixture in the starting lineup through 1958.

“He once stepped up to bat wearing a Beatles wig and playing “air guitar” on his bat, led cheers for himself in the outfield during breaks in play, and “talked” to Babe Ruth behind the center field monuments at Yankee Stadium. In his autobiography, Piersall commented, “Probably the best thing that ever happened to me was going nuts. Who ever heard of Jimmy Piersall until that happened?”

As a kid, I thought it was all pretty funny. Looking back at it later and realizing that he had such serious issues, saddens me.

One notable player that I got to see in Fenway Park was Satchel Paige when he  pitched for the St. Louis Browns. I remember seeing his long, slow walk from the visitor’s bullpen to the mound when he came in as a relief pitcher. He would have been in his mid-to-late forties by then. According to Wikipedia:

“Paige was a right-handed pitcher, and at age 42 in 1948, was the oldest major league rookie while playing for the Cleveland Indians. He played with the St. Louis Browns until age 47, and represented them in the All-Star Game in 1952 and 1953.”

Years later, after I had been in the Navy a few years, married to Helen, and had three young daughters, the Navy stationed me in San Diego where I served as a boot-camp company commander. We were all in San Diego in 1969 when the National League expanded and the San Diego Padres were formed. Helen and I attended the Padres inaugural game on April 8, 1969, when they beat the Houston Astros 2-1. The Padres went on to lose 110 games that year, and finish last in the National League’s Western Division. We always look back at that first-ever Padres game with pleasure.

The following year, Helen and I and the girls traveled to Yuma, Arizona, where we camped out and attended a Padres Spring Training game against the Chicago Cubs.

In 1970, Helen and I moved back to the east coast with our daughters, Deb, Teresa, and Sandy when the Navy transferred me to the U.S.S. Charles F. Adams (DDG-2) in Mayport, Florida. We’ve made numerous trips back to the Boston area to visit our families over the years. We were able to make a few more visits to Fenway Park. 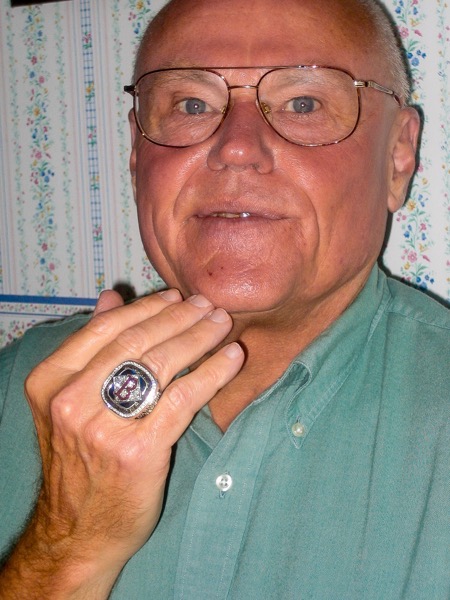 Thanks for taking a look!

Please Post Your Thoughts, Comments, Corrections, and Remarks in the “Comments” Section below… >>>>>

2 thoughts on “Baseball Fan for Life!”